The Story of SKORTCH, Parts 1 and 2 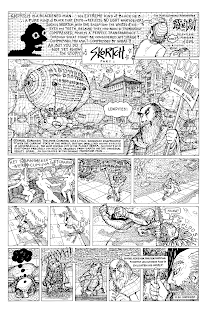 The Story of SKORTCH appears in the comic tabloid, Secret Prison

Labels: The Story of SKORTCH

It is what it is.

And then there's that other problem: the first day of the month and the first month of the year are each called "1"; but the first year of the decade, first decade of the century and first century of the millennium are designated by the number "0" (and there is considerable disagreement about that)! The decade of zeros is over, and this is the first year ("0") of the second decade (the"10's") of the first century ("0" hundred) of the third millennium ("2" thousand), or if you like, the twenty-first century ("20" hundred) following that Nazarene guy's entry into our simple existence. Of course if you're a right-to-lifer type you might claim the count to have actually started nine months earlier when his mom had the unusual encounter with that rogue angel (no disrespect intended to right-to-lifers, his mom or the angel).

Hoo boy! What happens with smaller pieces of time? First seconds (already it's confusing) and first minutes are both called "0" like years/decades/centuries/millenniums, and first hours are called, well, "12". (Yeesh!)

So welcome to my blog. And if you want to know what time it is, let's just say it's almost the middle of the night, it's getting warmer some three moons after that last short cold day, a couple thousand of those short days since the Nazz was known to be stomping around.

Bob Pistilli
Posted by BP at 5:19 PM No comments: